News
You are here: Home1 / News2 / Launch of the Regional Spatial and Economic Strategy (RSES) 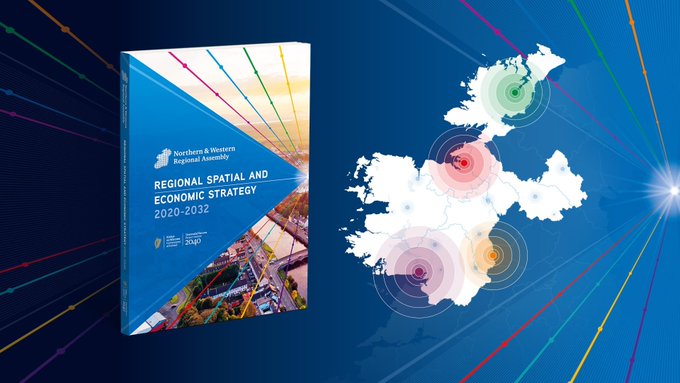 The Northern & Western Regional Assembly (NWRA) have launched the first Regional Spatial and Economic Strategy for the Northern and Western Region to promote more balanced regional development in the west and north west.

The plan will allow counties under its remit to compete with the greater Dublin area for investment, jobs and infrastructure. The strategy includes a Metropolitan plan for Galway city, as well as Growth Centre Plans for Athlone, Letterkenny and Sligo.

The Authority has also identified Roscommon town together with other towns like Castlebar, Ballina, Cavan, Ballinasloe and Monaghan, as “key towns” in a co-ordinated effort to attract business and people in the next two decades.

This site uses cookies. By continuing to browse the site, you are agreeing to our use of cookies.

We may request cookies to be set on your device. We use cookies to let us know when you visit our websites, how you interact with us, to enrich your user experience, and to customise your relationship with our website.

Click on the different category headings to find out more. You can also change some of your preferences. Note that blocking some types of cookies may impact your experience on our websites and the services we are able to offer.

These cookies are strictly necessary to provide you with services available through our website and to use some of its features.

Because these cookies are strictly necessary to deliver the website, you cannot refuse them without impacting how our site functions. You can block or delete them by changing your browser settings and force blocking all cookies on this website.

These cookies collect information that is used either in aggregate form to help us understand how our website is being used or how effective our marketing campaigns are, or to help us customize our website and application for you in order to enhance your experience.

If you do not want that we track your visit to our site you can disable tracking in your browser here:

We also use different external services like Google Webfonts, Google Maps and external Video providers. Since these providers may collect personal data like your IP address we allow you to block them here. Please be aware that this might heavily reduce the functionality and appearance of our site. Changes will take effect once you reload the page.

Changes to this Statement

We will occasionally update this Statement of Privacy to reflect company and customer feedback. We encourage you to periodically review this Statement to be informed of how we are protecting your information.