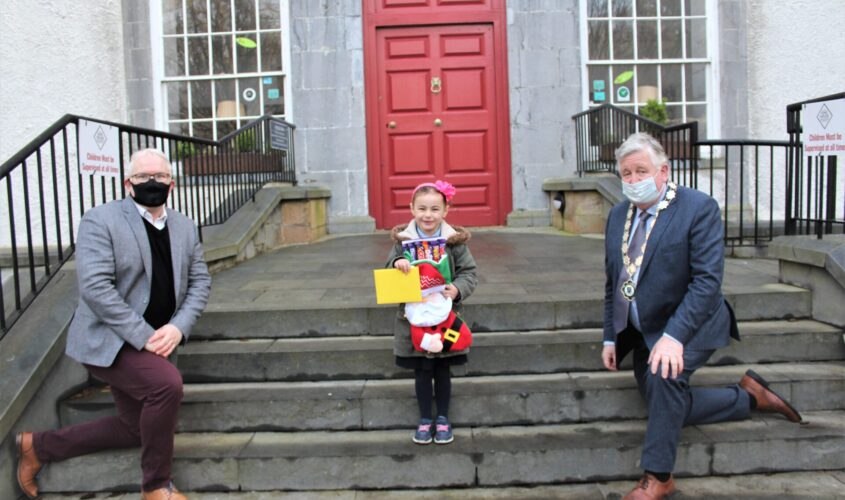 Íde Carty, aged 4, has been chosen as the winner of the Children’s Art Competition which was organised by the Forward Planning Team of Roscommon County Council.

The competition is an initiative to get younger people involved in the plan making process and for them to have their say in how the county develops in the future. Budding artists in the county were asked to tell what they would like to see in Roscommon when they grow up. The initiative was well received and attracted a large number of entries.

The winner of the competition, Íde who attends Corrigenroe National School, was presented with her €50 One for All voucher by an Cathaoirleach of Roscommon County Council, Cllr. Laurence Fallon at King House, Boyle.

The Forward Planning Team would like to take this opportunity to thank all the young artists who entered and their parents or guardians for their involvement and participation. All participants in the competition were awarded a Certificate thanking them for the important role they played in the future development of the County Roscommon.

This site uses cookies. By continuing to browse the site, you are agreeing to our use of cookies.

We may request cookies to be set on your device. We use cookies to let us know when you visit our websites, how you interact with us, to enrich your user experience, and to customise your relationship with our website.

Click on the different category headings to find out more. You can also change some of your preferences. Note that blocking some types of cookies may impact your experience on our websites and the services we are able to offer.

These cookies are strictly necessary to provide you with services available through our website and to use some of its features.

Because these cookies are strictly necessary to deliver the website, you cannot refuse them without impacting how our site functions. You can block or delete them by changing your browser settings and force blocking all cookies on this website.

These cookies collect information that is used either in aggregate form to help us understand how our website is being used or how effective our marketing campaigns are, or to help us customize our website and application for you in order to enhance your experience.

If you do not want that we track your visit to our site you can disable tracking in your browser here:

We also use different external services like Google Webfonts, Google Maps and external Video providers. Since these providers may collect personal data like your IP address we allow you to block them here. Please be aware that this might heavily reduce the functionality and appearance of our site. Changes will take effect once you reload the page.

Changes to this Statement

We will occasionally update this Statement of Privacy to reflect company and customer feedback. We encourage you to periodically review this Statement to be informed of how we are protecting your information.